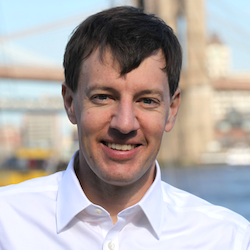 James Patchett is the President and CEO of the New York City Economic Development Corporation. James has spent his career building stronger cities through investments in affordable housing, innovation, and 21st-century infrastructure.

During his tenure, he has overseen some of the city’s most ambitious projects, including launching a citywide ferry system, developing Mayor de Blasio’s 100,000 jobs plan, and optimizing NYCEDC’s 60 million square feet of real estate.

Prior to his appointment as NYCEDC President in 2016, James served as chief of staff to Deputy Mayor for Housing and Economic Development Alicia Glen, where he helped oversee more than 25 city agencies and played a pivotal role in preserving thousands of affordable homes. James holds a BA in Economics from Amherst College and an MBA from Stanford University.

In this episode, we discuss NYC building a cyber army, economic development through cyber, business accelerators, matching inventors with business coaches, NYC’s talent pool, and so much more.

Where you can find James: