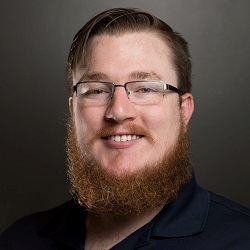 Robert M. Lee is the CEO and Founder of the industrial (ICS/IIoT) cyber security company Dragos, Inc. He is also a non-resident National Cybersecurity Fellow at New America focusing on policy issues relating to the cyber security of critical infrastructure. For his research and focus areas, Robert was named one of Passcode’s Influencers, awarded EnergySec’s Cyber Security Professional of the Year (2015), and inducted into Forbes’ 30 under 30 for Enterprise Technology (2016).

Robert obtained his start in cyber security in the U.S. Air Force where he served as a Cyber Warfare Operations Officer. He has performed defense, intelligence, and attack missions in various government organizations including the establishment of a first-of-its-kind ICS/SCADA cyber threat intelligence and intrusion analysis mission.

In this episode we discuss threat hunting, SCADA/ICS, IIoT, IoT security, his start in cyber security, the 2015 Ukrainian power grid attack, starting and teaching a SANS ICS class, advice he would give someone starting in the industry, and HACKNYC, and so much more.

Where you can find Robert: